Due to some unfortunate circumstances our booked after dinner speaker, Steve Cale, was unable to attend. After some frantic telephoning Jane was able to rearrange our annual programme to bring forward one of our speakers from later in the year, Helen Worvil. Helen’s subject was, ‘A Four Seasons Garden’. 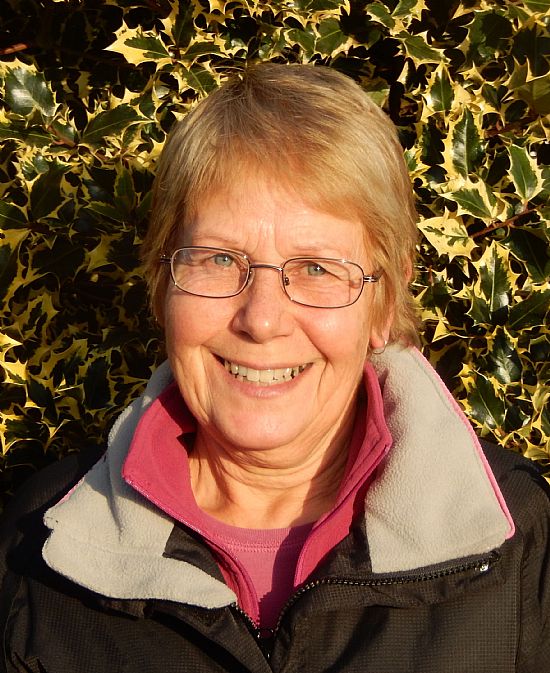 Helen had bought along two pieces of ground cover matting, which she spread out on the floor. One was to represent a garden plot with a north and therefore shaded aspect, the other, south and sunny. She continued by describing what plants one might use in each garden, defining those giving colour and interest during each of the four seasons in turn. Helen had potted examples of all the plants she described, which she positioned on the two areas of matting as one might in a real garden. I will not relay which plants she described, as her recommendations would just be a partial list of species suitable to achieve just one of the many effects possible – and I couldn’t spell the Latin names. Helen was of the opinion that leaving gaps was not something she recommended. Better to fill all spaces and then remove plants when things grew and became overcrowded. Natural seeding, she said, was to be encouraged, again, only removing whatever took over and became an excess. All the plants Helen used in her talk were for sale. 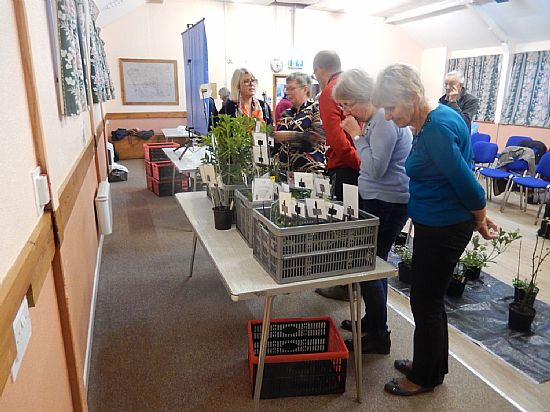 Plants described in the talk available for purchase.

As implied, earlier, Helen’s talk was preceded an ingestion of seasonal nutrition. The format of last year’s event was so successful that we could see no reason to make any major changes except for one: for some reason this season’s crop of apples was seriously down on last year. So much so, that we did not have enough to make any cider, hence no chicken-in-cider as previously. There was no need to worry, however. Jane and her swing ensemble worked their magic to serve up chicken breast with bacon wrap and cheese topping (vegetarian option – vegetable lasagne), jacket potatoes and salad. To follow: Xmas pudding, mince pie/Florentines, cream and brandy butter. All this was accompanied by a selection of beverages. It seems that there is always someone in the club able and ready to step in and help to make an event happen. But isn’t that what makes everything worthwhile? 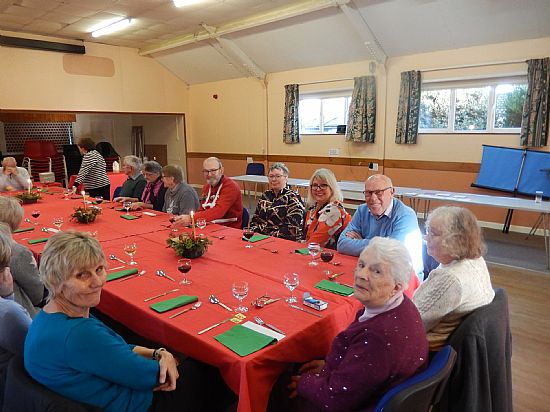 The party just getting started.

Disappointingly, last year’s quiz must have been too difficult for members or perhaps the questions on bodily fluids just a little inappropriate just after eating. Whatever the reason, that item was culled from the proceedings. But we were not going to let them get away with it. Jane had provided a Christmas themed quiz and I provided a ‘table quiz’, just 8 questions to ponder (or not) during the scoff, just incase they didn’t want to talk to each other. In order to allow for any reduction of faculty due to intoxication, I thought I had better make it mind crushingly simple, as follows: 1 - Essential when making a break. 2 - Wait your turn! 3 - Help to Bond. 4 - Where hundreds were lost in 1987, but five still remain from 1762. 5 - Where you can read about music. 6 - ‘I’ before is clever, but ‘I’ after is just a game. 7 - Go on now! 8 - Allows a pilot to feel his aircraft. To make it even easier, all the answers are connected. 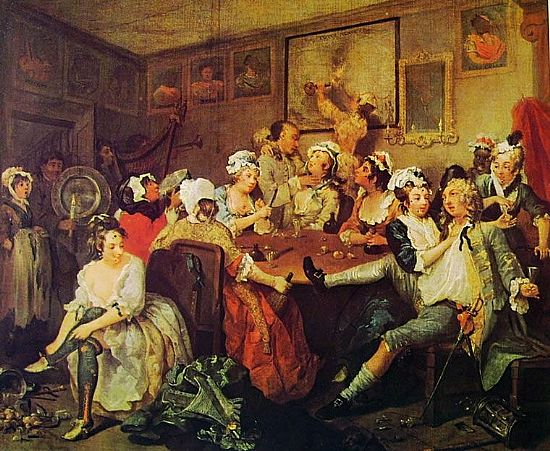 The party well under way.

Disturbingly, some of the members seemed to be fiddling with something under the table, hopefully trying to Google the answers? Sensibly, some members chose to wait and find out the answers when they appear in the January 2020 report – also to be available on our website (http://www.greathockhamgardeningclub.org.uk). Regrettably, people’s enjoyment of the events seemed to increase in direct proportion to the depletion of the liquid refreshment. Existentially, the party was an opportunity for everyone to let their (remaining) hair down and indulge in some friendly verbal exchanges as to how Brexit might change the way we have to run the club. Fortuitously, by the time our next meeting comes around, most people will have forgotten most of the more spontaneous sentiments, or most of anything for that matter. Mercifully, the police weren’t involved this year, and at least most people seemed to make it back to somebody’s home.

Our next event is on Wednesday 8th January. Dr. Ian Bedford will be explaining ‘The Trouble Without Wasps’. Doors open 13:30 for a 14:00 start.

Great Hockham Gardening Club meets the second Wednesday of each month. September to April in the village hall for talks on a variety of subjects usually slanted towards gardening. From May to August we visit local venues, again, mostly related to gardening. During the summer months we often throw in extra get-togethers at member’s homes where everyone brings a plate and we put the world to rights. More information can be found at http://www.greathockhamgardeningclub.org.uk.

It’s never too late to join.