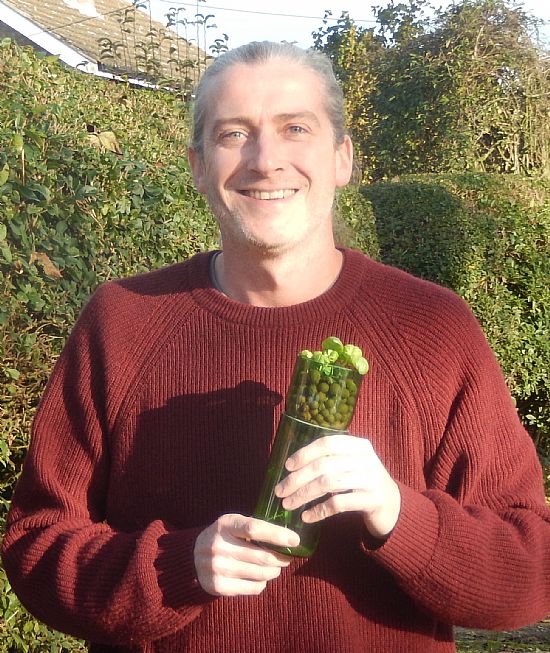 As the nights draw in and my cries for rain earlier in the year are answered, it seemed appropriate that we welcomed Julian McAlpine to give us what he called, a quick introduction to hydroponics. Coined from the Latin hydro meaning water and ponos meaning labour, the mechanism of hydroponics has been around a long time. Consider that plants growing in a natural aquatic environment employ many of the components of a modern hydroponic system. The scientific application of the principle was first thought to have been employed in one of the seven wonders of the ancient world, The Hanging Gardens of Babylon. During the 10th and 11th centuries the Aztecs developed a system of floating gardens using rafts made of reeds with the roots extending below into the water.

Early systems were a response to necessity. Some people live in areas of the globe that do not have soil or the soil they have is unable to provide the sustenance required for plants to grow. But there can be advantages to hydroponics even if the local soil is well drained and fertile. With hydroponics the plants can be supplied with a complete nutrient mixture. Energy is not wasted by over application and runoff. The plant requires a smaller root system as it gets all it requires with no competition with its neighbours. Soil based pathogens cease to be problem as in a modern hydroponic system there is no soil. There are no weeds therefore there is no hoeing. More plants can thrive in a much smaller growing area whilst still maintaining great plant quality – but with a caveat. Julian pointed out that probably 100% of salad crops and 70% of fruit found in supermarkets are grown in hydroponic systems, but commercial pressures can minimise nutrient input in favour of size and appearance over taste. Any hydroponic system we operate for ourselves, like our conventional vegetable plots, do not suffer from this drawback. Hydroponics should not be confused with the conditions found in a waterlogged pot.  In what is an anaerobic environment the plant roots receive little or no oxygen and are prone to pathogens that thrive in those conditions.

Julian reminded us that in order to maintain healthy plants they require five things: water, light, air, nutrients and anchorage. In a modern setup, anchorage is provided by media such as gravel, sand, vermiculate, styrofoam, coir, in fact any inert substance. Hydroponic systems can be constructed in a variety of designs. From the slides Julian used in his talk, all designs seem to have a basic layout. Working down, there is the foliage of the plant, the stem supported in the inert material within a container, the roots extending below the container and the nutrient solution in a tank underneath.

There are passive systems where the nutrient solution is transported to the roots via a wick. Active systems using pumps, floating systems with air pumps and air stones as used in fish tanks. In fact home systems are often setup with equipment from aquarium suppliers. There are drip systems, ebb and flow systems where water is pumped to cover the roots for a time, allowed to drain, and then pumped again, each period being about 30 minutes. The cycle is then repeated. But we are now getting into 24-hour operation using the appropriate lighting. There are aeroponic systems where the exposed roots receive a constant mist spray. Fundamental is that in no system is the nutrient solution discarded, they are all closed systems.

I regret that you may not have a clear idea from my notes of Julian’s narrative, and this is partly due to the fact that there were some very informative diagrams accompanying his description. There is much on-line, but Julian has a website, www.heyggww.co.uk, where there is more information and contact details.

Of course, this is not utopia and there are some disadvantages. These include the cost of equipment, it can be labour intensive, require a high level of expertise, daily attention, and specially formulated nutrients. Pests and diseases are a big risk especially as waterborne diseases can spread rapidly in a recirculation system. The more complicated systems will require electric lighting with a spectrum specific to the requirements of the plants. Also, some plants require direct lighting, some indirect. Nutrients added to the water include the familiar NPK, (nitrogen, potassium and phosphorous), with small, but essential quantities, of calcium, magnesium, sulphur, iron, manganese, copper, molybdenum, boron and chlorine. I may have missed Julian informing us of where we might source aforesaid chemicals, but I suspect he may be able to help if you contact him. Hard water may affect some of the nutrient components and in a commercial system may have to be treated, but at a horticultural scale rainwater would be as good as you need. There are now nutrient mixtures available that allow commercial hydroponic producers to claim their produce as organic. This has not gone down well with organic farmers of the more traditional kind who have had to invest a great deal of time and money in having their operation certified as organic.

Julian had bought in small DIY kits for people to buy. All components were from recycled items including wine bottles, green so that the transmitted light would inhibit algal growth. He did not enlighten us as to how he came by so many wine bottles.

The results of the competitions this month are as follows:

Our next event is our Christmas social. Members only, £5.00, meal and drinks provided, after dinner speaker, Steve Cale – The Nature Reserve Outside my Door. Important: pre-booking essential.

Our next meeting will be Wednesday 13th of December at Hockham village hall. This is our Christmas Social. Food will be provided, but any members requiring chemical modification should bring their own. Exact details are a bit hazy, but aren’t surprises what Christmas is all about?