We are now cutting down all the old growth from last year and putting it on the new compost heap. Our new shredder chews some bits that would otherwise be unlikely to rot down in a reasonable time. I aid the composting process by the regular application of a well-known activator, in fact, quite a lot more regularly than I did a few years ago.

Sue Thomas writes: Well, we are well and truly up to our knees in beans. The load in the poly tunnel that looked on their last legs have now come out in a blast of new flowers. The outside beans have again decided on a new flourish of flowers and the dwarf beans planted in error almost, are also flowering. The freezer is awash with beans. The latest alert has been plums. The two plum trees have been laden with the fruit. 36 jars of jam so far, 12 plum crumbles, 2 pies and masses of stewed fruit now in the freezer. Neighbours won't open the door to me any more!! On the flower front I made a new bed this year for cutting flowers, mainly dahlias and asters and at last they have bloomed and look splendid. They look so good I really don't want to cut them!! My 2 pear trees are about to ripen, so that will be my next project. Need a bigger freezer!!! Keep safe everyone.

Julie Brown writes: Hello Ed, I was in the garden watching a hummingbird moth feeding on my busy lizzy tower, quite big, wings just a buzz of constant movement. A proboscis about 3 cm long, fascinating to watch the proboscis go down completely into the flowers, quite un-bothered by me stood watching. The busy Lizzy have been lovely and I have been able to collect seed from white, pink and salmon. I am hoping for some of the dark red. 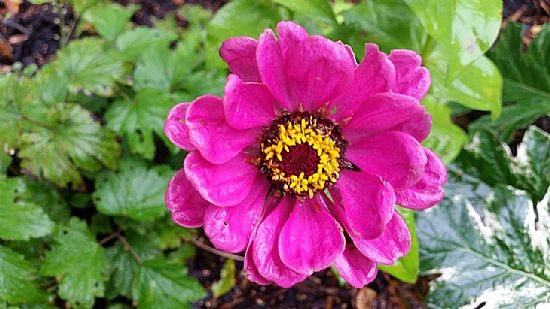 We did have a 2nd brood of swallows on the porch; they chose to finish the nest cup started last year to do this, so look up before stepping in and out of the front door, a patch of crap on the doorstep, but worth the trouble of clearing up after them. 4 beautiful babies, such lovely faces, they have taken to the wing. They are marvellous to watch, masters of flight almost immediately. How blessed are we to have enjoyed this spectacle every year we have lived here. 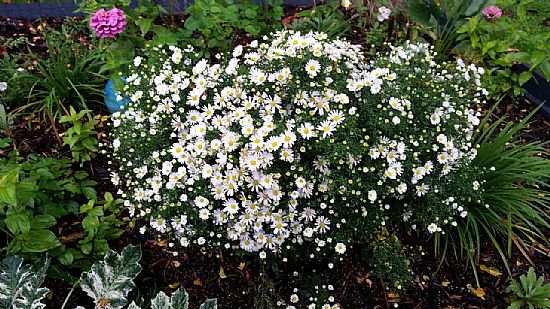 Been washing slate at Liz's; messy but another little project completed and bags emptied and cleared away. Lots of ornaments of cockerels and chickens on display. 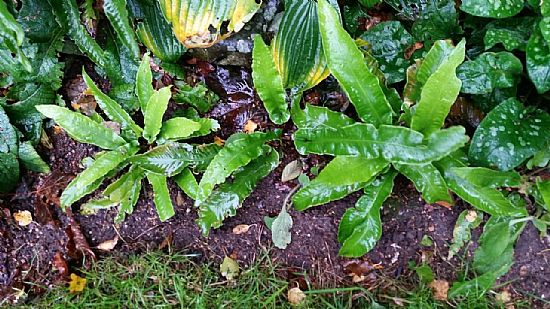 Much time has been spent at Liz's son Michael's front garden. The neighbours in the close walk their dogs regularly, a ploy me thinks to see how the garden is progressing, Liz and I, having cleared the whole garden. Michael dug a trench to place tiles around to form a raised bed. While he did that we dug out the stumps of the trees, felled and injected with stump killer 3 years ago. Still quite a job but we ladies were successful; one of them was very big, big indeed.

Then the pond digging began, now that's Michael's department. I'm hopeless at digging, Liz's comment! The pond is big enough and deep enough for us ladies to sit in submerged up to our necks. We had better behave. Liz raked the garden over and took the rubbish off while I made the tea.

Next a trip out to Swallow Aquatics for the liner and a few plants, then back home to line the pond. Read the water meter then, a little wager; how long to fill and how many litres of water? About 1100 litres and an hour and a half to fill. Guess who won both wagers? Yes Michael, cheeky little what not, knew the water pressure and flow. 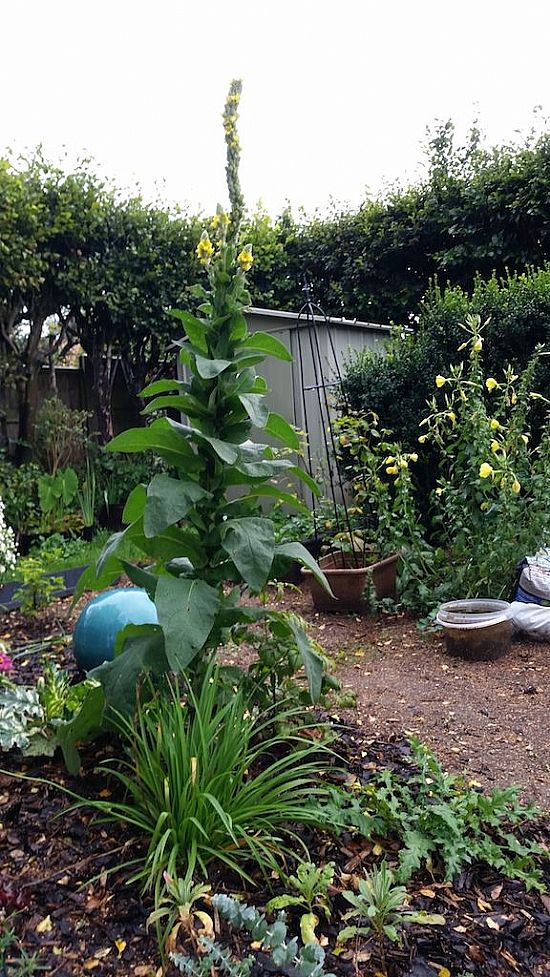 We had some lilies early in the season from the neighbour with the boating pond, potted up and growing in Liz's pond they are now transferred to Michael's new pond and the wildlife are there immediately. A hole has been dug out beside the pond, lined and filled back in to be a bog garden. The pond will overflow into the bog garden. We've had enough rain to see that it will do that ok.

I haven't been over for a week but I have received progress reports. The planting has begun around the edge of the garden, too wet to get onto it. The next job will be transporting smooth round flint stones from No 1 at Wretham to No 1 at Feltwell to put around the pond edge and bog garden, I hope there will be enough.

I did spend a Sunday clearing an area in my own garden where I am going to put our Mum's bonsai horse chestnut tree, as Japanese as I can make it. It is taking me an age, maybe because I was potting up at I went. Lots of Bears Breeches and a fern, they have been transported to Feltwell along with a fern that was smothered by the BB. Some of that is off to Laura & Nige. Still a couple of woody shrubs I hope to replant somewhere else in the garden.

Then I will have to plan the shape of the garden and the placing of the 3 very heavy stones that came from our Mum's Japanese garden, as the men are only going to move them once...

Had a chat with sister Madeline this evening, will we head over to Ipswich to help her empty her pond, sort it all out and put it back? Of course the answer was yes, anyone need pond plants? I think it's a water hyacinth hogging all the room.

Happy gardening and best wishes to all, Julie, Liz and Michael.

Prue and I have been hit by unforeseen work. After resting for a couple of years our Bramley apple has fruited in spectacular fashion. There is absolutely no way we can use them all, and there are even too many to give away. Fortunately, there is Trevor.

It just so happened that several years ago we attended a talk hosted by the Attleborough Horticultural Society – this was just before we moved down market to a gardening club. The speaker was a chap by the name of Trevor Greenwood who gave us a talk on all things apple. Trevor has large orchards and presses his own apples, and pears, to sell throughout the year as juice, cider and cider vinegar. During the talk he mentioned that he would press, bottle and pasteurise juice for people like us. If it looked like we might not need so much juice in bottles he would put it into large containers for us to make cider. Not only that, but in subsequent years we could take the empty bottles back to be refilled, thus reducing the cost. Also, if we still think we still had too much, Trevor will take our excess as part payment. He tells us Bramley juice is much sought after by aficionados. Because it’s pasteurised it keeps for a long time, years in fact. This gives us the option to have it cloudy, or by leaving it for a while, clear. Sell by date? Not a problem as we don’t sell it. 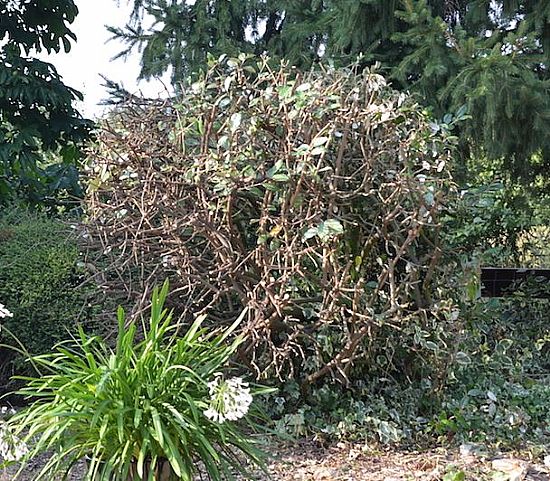 Why don’t we press them ourselves? Well, if the above are not enough reasons, then there are other considerations. First we would have to buy the kit. At that time we were a bit boracic and the quantity seemed too daunting for a DIY operation. We had several trees and picked about 500 kg that year. No way were we going to be able to process that lot. And then there was the pasteurisation.

We have no idea how much all that equipment would cost us and it would take up a lot of space for something that only gets used a couple of times a year. Then, what would we do if, as has happened to a couple of other of our apple trees a few years later, the Bramley gave up the ghost? We’d probably be selling the kit on at a heavy loss. We did try to do it once using a plastic manhole drainpipe and a couple of car jacks, but we didn’t seem to be getting much juice. Then we found out that to maximise the quantity, the apples needed to be thoroughly smashed up prior to pressing. 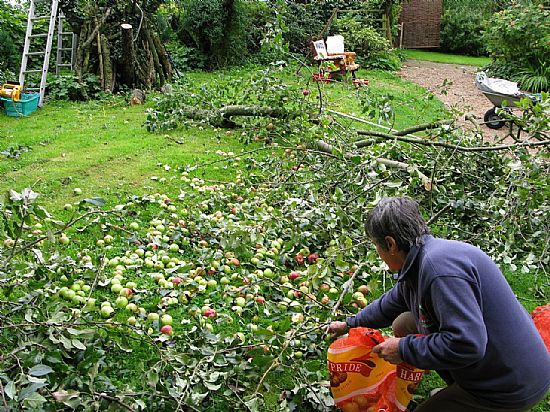 The speed of production has other implications: think oxidisation. The faster the whole process is carried out, the less discolouring takes place in the final product. Trevor’s system is industrial and fast. Then there is his mighty press. The motorised hydraulic press gets far more juice than we would ever get with the winding-the-handle version. This year we are down to about a 100 kg, but we think it’s preferable to keep the original arrangement going. 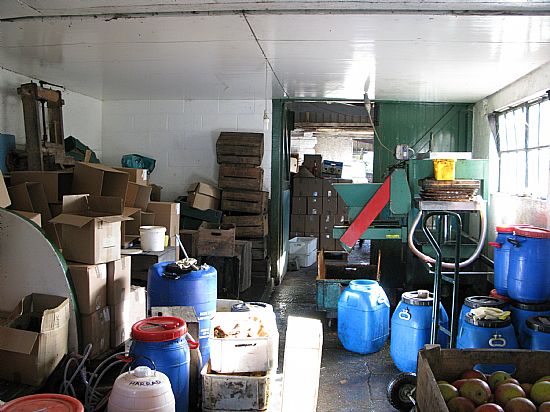 Some people might wonder about drinking a juice from cooking apples, is it not sharp? Well yes it is, but not as sharp as you might think. What it is not like is the syrupy liquid purveyed under some commercial labels. Anyway, don’t say sharp, say dry: it also makes an excellent non-alcoholic dry white wine substitute to drink with a meal. Just one last thing: it’s as organic as anything can be.