To save time, let’s just say I have been complaining about the weather and leave the detail to Jane Dalton.

Well what a different spring it is this year compared to last! Frosts virtually every night and the heating on full blast. Even though we have had some lovely sunny days it is chilly with the wind from the East, I am still having to put the Greenhouse heater on and shut the hens up – unlike last year.

The colour in the garden is just about hanging on from the bulbs but none of my seedlings are doing well – too cold. The allotment is looking good – but that’s because it has been too cold and dry for the weeds to get cracking – they will now we have had some rain! We have had 2 meals from the Asparagus already – divine – it is my absolute favourite!

Still no takers for our camera bird box but a family of Robins nested on the shelves right next to the bins in the Wood Shed/Lean-to. They built their nest in one of my Flower Arranging trays…  4 fledged and 2 survived. It has been so lovely to watch all their comings and goings.  We also have a Pied Wagtail nest in a Robin’s nesting box, which has never been used before; they have laid 5 eggs so far. It is quite near the house so we can see it easily.

We have had a few friends and family round for drinks & supper in the garden and for coffee but too cold to stay out long!

We surely can see the light at the end of the tunnel now…. my 2nd jab is on Thursday this week – it will be good to get that sorted.

Once 17th May is here and Lockdown gets eased to include indoor visits, life should feel a bit more normal.

I hope to restart my watercolour classes soon. During Lockdown I have worked hard and extended the modules from 6 to 14… If anyone is interested do let me know.

Wishing you all the best , Jane.

Sue Thomas is into conservation.

Asparagus eventually appeared at the end of April, and I am sure we will be sick of it in a few weeks. Tomatoes safely moved to bigger pots, and soon to be moved to poly tunnel, which has been newly manured and topped up with our new compost from last year. Been pricking out my Asters and Dahlias, grown from seed, (I am mean and won't buy those already in plugs). Only a few failures this year, but can live without lobelia and chives! Greenhouse is on its last legs, so looked for a replacement so I can have it ready for next spring. Plan A was to build a replacement using the pattern pieces kept from when the original one was built, but timber prices have soared and time seems to be at a premium. Plan B was to send for catalogues, but to replace a greenhouse of the same size, we are talking telephone numbers!! Plan C was to buy a secondhand one, but again some want ridiculous money for a small greenhouse, agricultural glass, and have to take down and remove in just a few days! No tow hook, no trailer! Plan D came about looking at double glazed units, and it became clear that you can purchase a whole uPVC conservatory, complete with double doors, roof vents, double glazed units and even a finnial on the roof for anything between £1 and £500. We snapped one up in Norwich, which had already been disassembled, and the kind seller actually delivered it for a few sheets of plastic money!! He also made a plan of each piece, numbered and labeled them and gave us the plan of where each piece fitted! A Brillian Result!! We have the whole winter to clean and change the colour from white to green. Am no longer a gardener, am now a painter! Second jab now administered, so am ready for anything Keep safe, Sue

Julie Brown, as with many others, refuses to rid me of my old rubbish:

Thanks for the offer of brewing equipment, I think Tony has plenty and I'm teetotal.

I send pictures of tulip Marilyn white with red ripple markings, red and yellow are Flyaway, my black tulips produced one with 2 flowers on one stem, they are in the white bed with the lovely pure white tulips. I have tulips of fringed yellow, parrots of red and white, a few pink, the last 2 of red and yellow Mickey Mouse but have planted new red and yellow. I am completely smitten with my Swiss Trumpet Gentian, such a vivid blue and 10 breathtaking blooms. I need to cut the old fronds from the ferns, the new are waiting to unfurl and show off their pre-historic beauty. 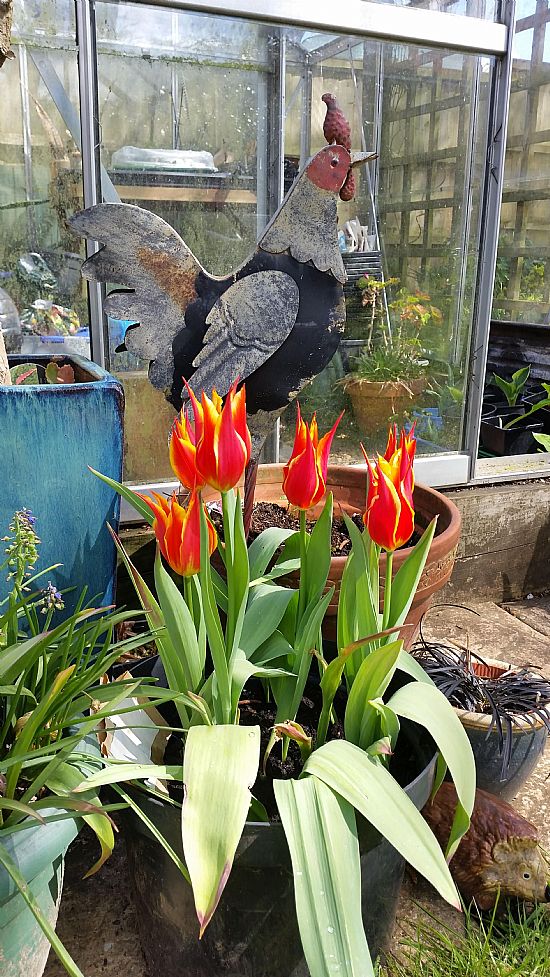 Visited Wretham Lodge under the National Garden Scheme, beautiful tulips in the garden there too of pink, purple and pure white, lovely very old horse chestnut and copper beech trees. The turkey over the wall was competing with the pheasant, who could make the most noise, both very handsome birds. 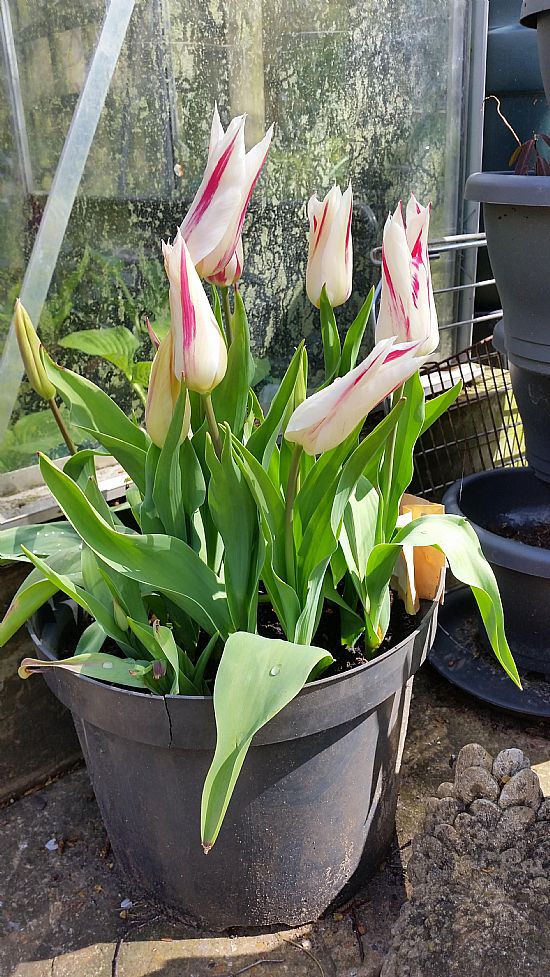 Seem to have done very little in the garden, I did manage to do a little tidying of the village hall garden, had other duties to carry out indoors. Disappointed that the air frosts have caught almost all of the flower buds on my climbing hydrangeas, one faces east and the other north, only the few flowers at ground level seem to have been missed, good that I grow it mainly for the green glossy leaves.

The grape hyacinth is Babies Breath, quite big and a pretty pale blue, the tulips to replace Mickey Mouse, red and yellow. 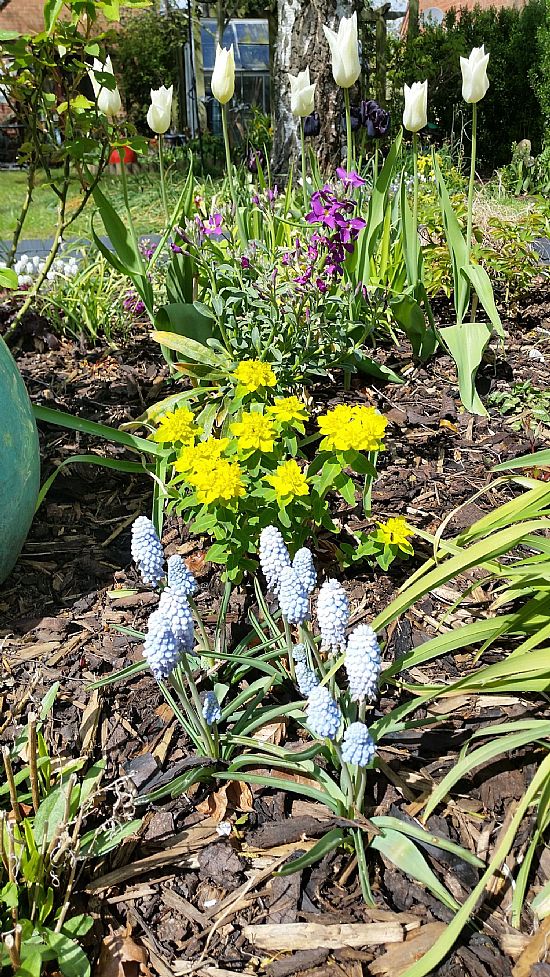 You can just about make out the black tulips Paul Scherer in front of the silver birch tree, then Tres Chic white tulips, lovely acid green euphorbia then the grape hyacinth, I had 30 bulbs and each seems to have produced 2 or 3 flower stems, well worth the money from Farmer Gracy, it's where I bought the tulips, too and I have, new hostas to go into the shady corner, Devon and Guacamole, from there also. Hoping to see flowers on the Pheasants Eye very soon, not previously had any success with them, always grown them in pots but this time in the garden, however someone has thrown garden rubbish away and each year there among the nettles over the hedge is a clump of Pheasant Eye flowering their hearts out as too the native snowdrop, best leave them where they grow best eh?

For Prue and I, distributing the contents of last year’s compost heap is another milestone in the gardening cycle. This is when we get to see how the grass snakes got on last year: judging by the number of egg cases, they did well. It’s a fairly sticky mix and, in spite of a walk from the other end of the garden, chooses to fall off my boots only when I put just one foot in the door to reach for a sticking plaster. 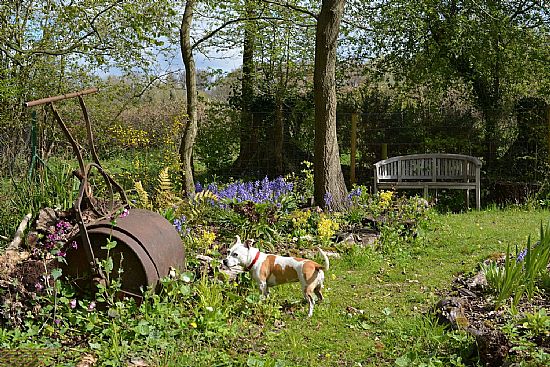 Back in December last year as I may have mentioned, Prue and I had been toiling for a couple of months, ripping up the garden to have fibre broadband installed - we thought an improvement on 1.5 Mb might be in order. Well, on March 3rdwe were finally given the installation date of April 28th We got an e-mail the day before reminding us they were coming and another the next morning saying that ‘Jermaine was getting ready for us and would be with us soon.’ Our excitement was palpable. But Jermaine didn’t turn up! Not only did he not turn up, but we had no communication from him. BT obviously had our e-mail and we thought, if they don’t know our phone number, we’re lost. They had put a message on BT account web page saying they would contact us, but it was only when we checked a few days later that we discovered we had been rebooked for Friday 7th May. Friday!

After many moons, going out for a meal is again permitted and Friday was always our favoured day to visit Wymondham when we get some stuff on the market and have a lunch at the Green Dragon. Not to worry, we had gone the previous week, but even eating out seems to have become something of a trial. Apparently, to get into the pub we needed an ap. I’m not sure, but I think it worked something like this: you get this ap, then you reserve a table with it, then when you get there you scan something at the check-in point, then you scan one of those square thingies on the actual table. Then, although I’m not sure about this, you even order your scoff with the ap, and I think you might even pay with the ap. Goodness knows. Anyway, in the end we managed to get fed using certain vocalisations while the waitress made marks some white material. I fear that if we don’t get up to speed with this sort of thing we could starve. There were these three women on the next table; all of them were constantly interacting with their mobile devices. Were they using this ap? We didn’t like to ask. As it turned out, we got served before them. I suppose the waitress felt pity towards us.