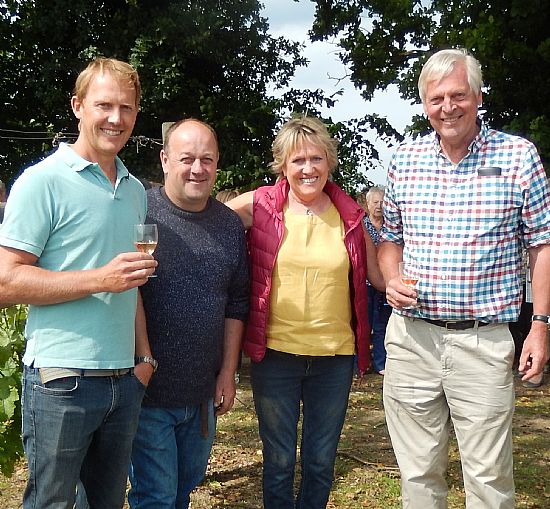 Named after the Humbleyard Hundred, a medieval legislative and taxation court during Anglo-Saxon times, the Humbleyard Vineyard is one of a number operating in the Norfolk area. Club members and guests assembled at the Paddock Farm Shop, Mulbarton. Owners Robert and Susan Preston, Oliver Berney, Susan’s son, and Graeme Barton hosted our visit. Graeme has worked that piece of land all his life, long before the vineyard was started. As was appropriate in an agrarian environment, we were transported from our meeting point to the vineyard on a trailer with straw-bale seats. 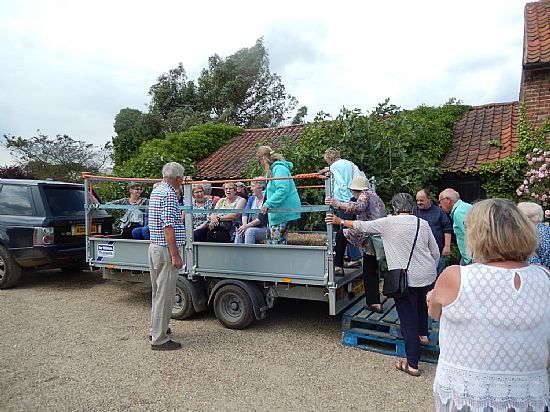 The site had been chosen as it was on the side of a south-facing slope. This was not only to allow more exposure to the sun, but also to let ground frost flow down-slope and away from the vines. Also taken into consideration was the fact that the site had previously been producing early-ripening fruit for 35 years. The first vine planting was in 2010 and continued through 2011 and 12. The vines had been planted using an automatic laser-guided machine bought in from Germany. Robert marveled at the speed of planting, faster than you could keep up with while walking. The vines do not need watering as the roots by now are probably about 9 – 10 feet deep, but could eventually extend to 30 feet. The numbers of vines of each type were chosen so that, even in a bad year, each type would produce enough grapes to provide the minimum batch load for processing at the winery in Sussex. The type of grapes were chosen to spread the times of ripening which in turn spread the harvesting time and the risk of bad weather losses. They get about 2 tons an acre whereas in some parts of the world there can get up to 10 tones. Currently there are 9 varieties of grape on 10,000 vines covering 8 acres producing 25,000 bottles a year. Between the rows the weeds were left to minimise soil erosion. 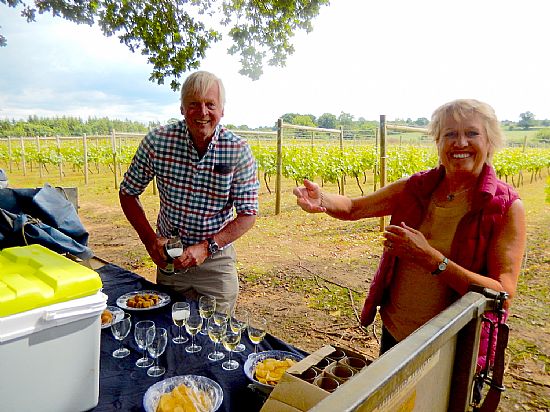 During the growing season it is necessary to remove some of the leaves, but a balance has to be struck between having sufficient leaves to maintain growth and removing enough to allow the sun to ripen the grapes. Apparently, the French have a rule of thumb as to the correct amount of leaves to remove: were there to be a naked lady in the next row, then you would want to remove sufficient foliage to facilitate a good view. After Oliver had explained the characteristics of the various grapes we were invited to sample the two sparkling wines produced from the vines we had just seen. 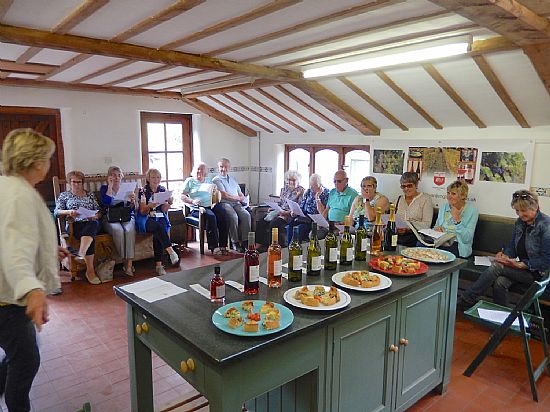 After the ride back we were invited into the back room of the farm shop to sample the seven still wines and the triple distilled High Spirit they produce. We all had a crib sheet listing the wines to enable us to make notes. So as to avoid confusion Robert rang a large hand bell when the next vintage was about to be offered, followed by a description of it. An excellent spread of finger food was provided to accompany the tasting and the atmosphere became ever more relaxed as the afternoon progressed. Well, you couldn’t just leave without a memento or two; as well as the wines the farm shop stocked an excellent selection of Norfolk produced fruit, vegetables, preserves, baked items – all you would expect and more. 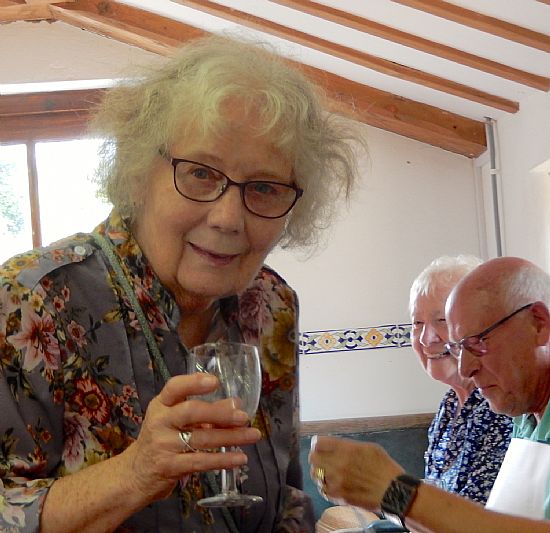